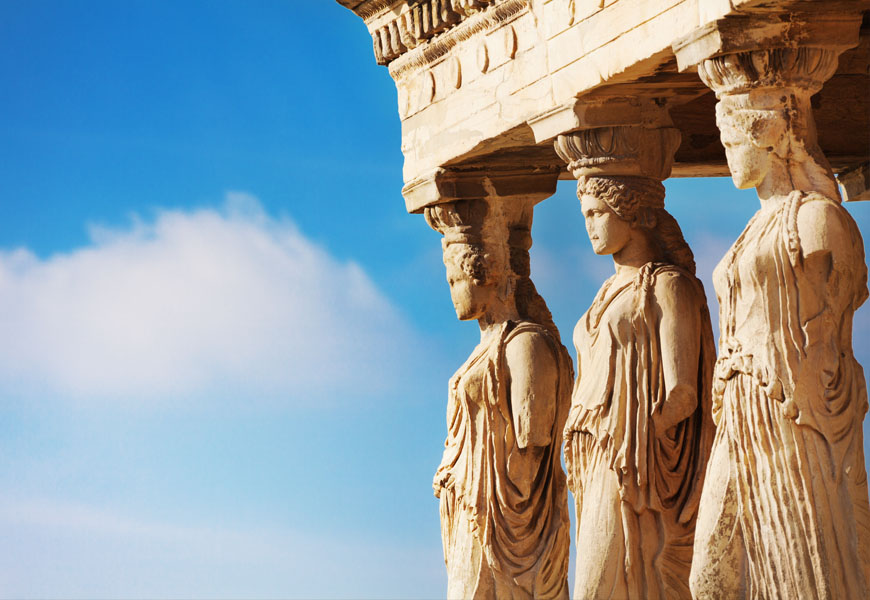 The Erechtheion is an ancient Greek temple on the north side of the Acropolis, dedicated both to Athena and Poseidon. It is believed that the temple was built between 421-406 BC and the architect was Mnesikles. The sculptor of the building was Pheidias, who was appointed by Pericles to decorate the Erechtheion and the Parthenon. On the north side there is another large veranda with six Ionic columns and to the south the famous “Promise of the Koroni”, with six dressed female figures (Caryatids) as support columns. The legend says that Athena and Neptune claimed who would be the protector of the city. In order for the residents to decide who should have this honor, they organized a competition. Poseidon struck the trident with the ground and splashed seawater. Then Athena demonstrated its strength and hit the ground and the first olive tree rose and, as you may know, the olives were very important for the Greeks. Athena won the contest and became the patron saint of the city and her name. Now that you know the myth, go to the north side and look between the columns above the door and on the left, at the ceiling, you will notice a void. This is not corrupted, as you might imagine. The Erechtheion architects deliberately left this place to show where the trident of Poseidon hit the ground. Through an opening on the floor there are signs on the rock, where the ancient Athenians believed that the trident left its mark. At the same place there was a tank. Pausanias claims that the reservoir contained salt water from Neptune! To the west of Erechtheion you will see an olive tree. It was recently planted by Queen Sofia.