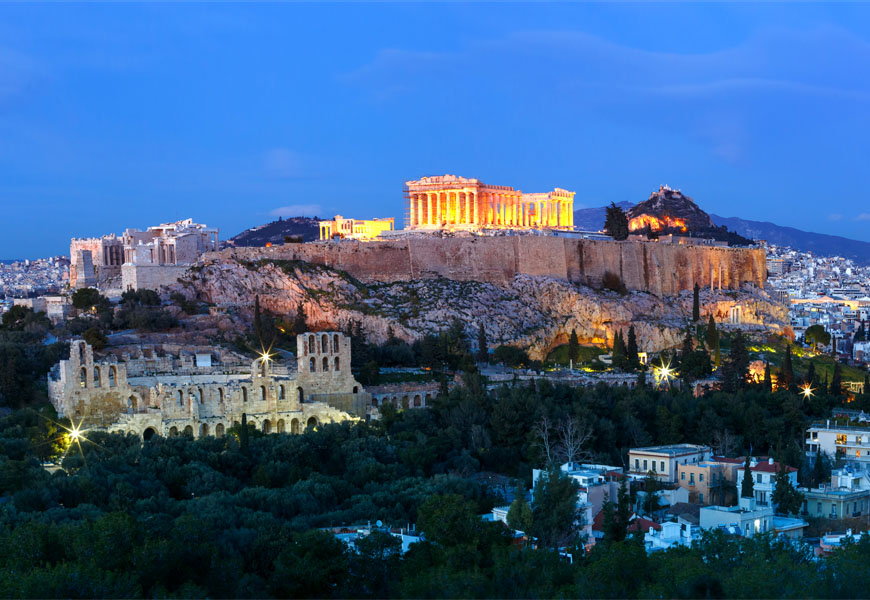 The Acropolis of Athens is an ancient acropolis located in an rocky area overlooking the city of Athens. While there is evidence that the hill was inhabited since the 400 BC, it was Pericles who in 500 BC, co-ordinated the construction of the most important buildings in the area.

On the Acropolis there are three ancient temples, the Parthenon, the Erechtheion and the Temple of Aptera Nike. There is also the monumental entrance, the Propylaea. All the monuments of the Acropolis are made of Pentelic marble and were built during the Golden Age of Pericles (Classical Period, 450-330 BC). The Parthenon was dedicated to the goddess Athena, the patron saint of the city of Athens. It was built by the architects Iktinos and Kallikrates under the supervision of Athenian sculptor Pheidias. One of two colossal statues of goddess Athena was in the Parthenon, made of gold and ivory and was 9 meters high. The other, equally large, was made of copper and was located outside the temple. Right above the Parthenon lays the Erechtheion. It is the temple whose 6 columns are in the form of young girls, the Caryatids.

What you need to know: The ticket you will pay includes visiting other archaeological sites near the Acropolis. After your visit in Acropolis you can continue your walk and visit the Ancient Agora, Kerameikos, the Roman market and the Temple of Olympian Zeus.

Visiting the Acropolis can cause some inconvenience during the summer months due to the lack of shade and heat, so start early in the morning. Also be supplied with hats, comfortable shoes, sunscreen and water. Better not get a car, as it is very difficult to park in downtown Athens.
Scroll through the Public transportation.